Lament of an Endangered Species - The Serious Collector vs Mass Media, Flea Markets, Imports and a Never Ending Supply of Cheese Boxes

Browsing the news stand the other night I noticed not one but two magazines devoted entirely to the subject of flea markets. And I'm not talking about thin, little wispy offerings. I mean full-on, high quality commercial magazines. Each of them had over 130 pages of content! With all due respect to flea markets, and I say that as someone who enjoys them, the flea market mentality appears to be taking a tole on traditional collecting.

Whats happened to the interest in genuine antiques? Are they priced to the point where collectors can't afford them anymore?   The supply of quality country furniture and accessories has diminished to an alarming point. It is likely to be replenished somewhat by old collections being dispersed but will there be a receptive market for them?  Over the years, at least until the meltdown in 2008, prices for country furniture continued to go up and up.  Did it reach the point where the younger generations simply turned their back on authentic antiques? Are they not willing to pay the price for real antiques, when they can have as much or more fun finding something at a flea market to sand, cut, paint or whatever and make into something useful for the home?  Is the serious collector disappearing?

For some reason when I started to collect 30 odd years ago, I gravitated over time to antique country furniture and other objects that were in their original paint or at least an acceptable over paint.  It wasn't a transition that happened over night and in fact took a few years before I lost interest in "stripped" and refinished country furniture.

Thereafter, I only searched for and purchased "museum quality" antiques and folk art or at least items that were reasonably close to that standard. I wanted to learn as much as possible. I purchased all the available reference books on the subject of country furniture, subscribed to the trade papers, read local history books about my area, so I was familiar with 19th century immigration patterns and settlements, attended countless auctions, visited dealers shops, became friends with pickers and took part in all kinds of antique shows either as a customer or dealer.

Over time I became knowledgeable in the design of antique country furniture. I could look at a cupboard and know if it was made by an Irish, Scottish, Polish or German cabinet maker. In some cases, I could even name the cabinetmaker.  I could recognize most if not all of the native woods used in country furniture on sight: pine, oak, maple, ash, elm, basswood, butternut, walnut, cherry, birch even cedar, poplar - and still can! Like other collectors and dealers, I could date furniture and other objects with reasonable accuracy.  Short of going to school to learn the subject, this was the way that most of us gained our knowledge of Canadian country furniture, accessories and folk art. 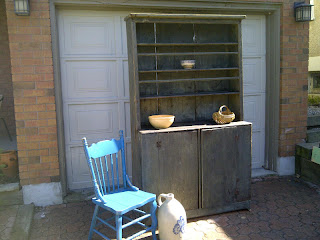 These days, that progression of learning over time seems out of vogue.  Today's younger buyers by and large seem to want the look espoused by various interior design and home decorating magazines. Objects don't have to be antiques. The harvest table, the cupboard, a set of chairs don't need to be authentic - they just need to "look" authentic.  And, to heck with taking the time to learn.  If it looks good and the price is right - buy it.  Look, I'm all for recycling furniture of whatever age, what I lament are editors that put this material on the front covers of their magazines as if it was the be all and end all of antique design. It's not. Giving a mismatched set of chairs and a table made in 1950 a coat of white paint and calling it "country chic", may look pretty in a photograph but that's all it is. So that's clearly one of the issues, a flood of material into the market with little or no integrity some of which is promoted in mass media magazines. Sadly, I don't see any mass market magazines promoting museum quality country furniture and accessories!

While antique dealers have influence over price, it's not antique dealers or collectors that influence taste. It's those who control the media and the content within the media that have that power, at least to some extent.  Publishers and editors are in the business of selling magazines not selling antiques; so if some new trend, as superficial as it might be, will sell more magazines - they'll put it on the front cover.

Complicating the matter further is that the number of areas of collecting has exploded. Back in my day, country furniture and accessories and formal antiques were about the only areas of collecting available. Nowadays collectors can collect art deco, modern, post modern, nostalgia, 50's kitsch, material from the 60's, teak from the 70's, industrial and more. Back in the 70's we we couldn't collect those items since we were still using some of them in everyday life! You can even collect Chinese antique furniture as it is imported into this country in seemingly endless quantity and container loads of European country furniture arrive on our shores with alarming frequency further muddying the water and confusing collectors at all levels.  Perhaps that's the issue, the market has splintered into so many categories.  Country furniture is only one of many. Plus some of the material in these other areas of collecting is more readily available.  Critics might say, too bad, you country furniture dealers had it your way for too long! And, they'd have a point. The independent nature of the antiques business has prevented dealers from banding together to promote their area of collecting and to develop educational and information programs for new collectors.

It's disturbing to see young collectors buying refinished wooden cheese and dynamite packing boxes at $45 a pop at flea markets and field shows when they could be buying items with much more integrity and value. But as long as show promoters allow this stuff into their shows, the public will buy it. And let's face it buying something at the flea market or at a field show for $45 or $50 doesn't pose much of a threat to the budget.  There's no research required. Plus, there's a bit of excitement to boot. Compare that to the prospect of shelling out hundreds or thousands for a reasonably decent antique item. Who needs the hassle, I can hear them saying!  A "gate" of 3,000, 5,000 even 10,000 people means nothing to the dealer of museum quality country furniture if none of those customers buy from him or her. Show organizers also have an obligation to educate customers not simply promote and event. And, by allowing anyone willing to pay for a booth into the show it undermines the dealers who have brought quality items.

I remember for years trying to get into one antique show as a dealer. They did not want another country furniture booth as that area of collecting was already well represented. Finally, I offered to  feature "folk art" in my booth. That changed their minds. I did the show for seven successful years thereafter.

All this does not bode well for any of us in the collecting field. Sure, there are niche areas where the passion remains high for all concerned like decoys, early advertising items and decorated stone ware.  It remains to be seen how it will all play out. Is the serious collector a vanishing breed? Perhaps if the economy ever turns around and genuinely gets going again, this malaise will lift and all areas of collecting will get a boost and return to a better state.  It would certainly help if country furniture and folk art received the coverage it deserves in trade and mainstream media.  Unfortunately, editors and reporters with major media outlets know next to nothing about antiques and folk art. Don't look for any leadership in that direction.  Trade publications do a credible job of reporting on genuine antiques but they to a large extent are preaching to the converted.  But I've also seen examples where sub standard merchandise receives editorial coverage.

Museums at all levels seem under resourced to mount new exhibitions of their objects which might spur the interest of new collectors. It's hard to be a leader when someone keeps cutting your budget.
In the meantime, I fear however, that country chic, flea market finds and similar low level material, promoted by superficial magazines, will rule the day for some time to come.  Last Saturday, at a yard sale around the corner from my home, a young couple had 20 cheese boxes they wanted to sell. I looked at the boxes. I considered it. I walked away. 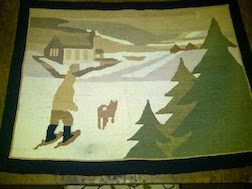 (Note: The items depicted in the photographs above are from my personal collection of country furniture and folk art which for my money still remains the single best collecting category of them all.) (My book, Folk Art in the Attic, a memoir of 30 years of antique collecting, is expected in the Spring of 2014.)